Why You Need To Know About Variable Pattern

With the release of SOLIDWORKS 2015, Variable Pattern was added to the available pattern types. For long time
users who may have attended training in the past, this addition may go
unnoticed. So why is it so important and why should you add it to your repertoire?
The Variable Patterns most radical
enhancement was its ability to pattern Reference Geometry. Let that sink in.
Yes, you can pattern planes and sketches, not just Features, Faces, and Bodies.
Let me give you an example of just how powerful this is. 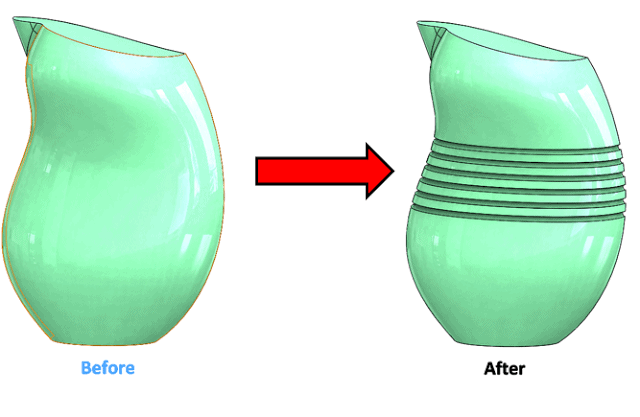 The original cut, which happens to be at the top in this
case, is actually quite simple. I had to add one extra step to get it to work
properly and that is to base the plane’s height off of a simple 2D Reference
sketch. Here’s the breakdown of how it is created –
1.    Create a Sketch that need only contain a
straight vertical line that ends where you want your plane. 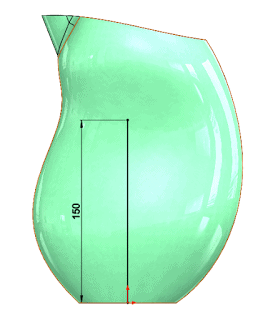 2.     Create a Plane at the proper height using the reference sketch you just created 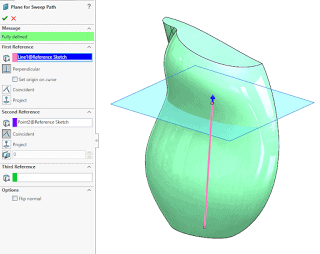 3. On the Plane, create a Sketch and use the
Intersection Curve sketch tool to create a spline where the plane and the face
come together 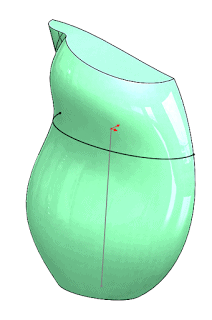 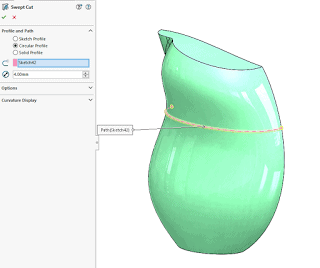 5.  Create the Variable Pattern. The top box will
have the Swept Cut. The bottom box will have the reference sketch used for the
plane and the plane itself.  Here is what
the property manager will look like 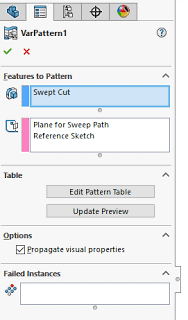 6. Once you have the proper features selected you’ll
need to “Edit Pattern Table” create the instances of the pattern. As you can
see the only real dimension is the dimension of the reference sketch for the
plane, hence why we needed to add that sketch even though a plane could’ve been
created in that spot without a sketch. 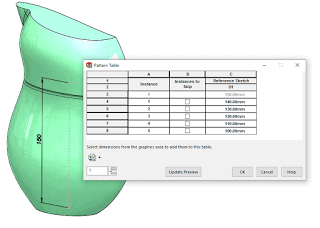 So if you’ve been building your model along with me, you can
see the magic of the Variable Pattern. The pattern feature will create a new
Reference Plane, a new Intersection Curve, and a new Swept Cut for every instance in the pattern. Image doing
this in years past, every cut would have to be created manually. In the image
below I was able to put a diamond knurl on a compound curvature surface using
the same technique as above, only using two swept cuts and Variable Patterns instead of one. I have attempted this in years past, and was much slower as every groove was created
manually. 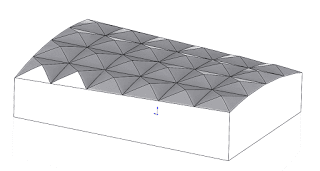 So hopefully you can see how truly unique and powerful this
feature is will be able to apply this to one of your models soon.
Enjoy!
Find Your Design Solution in the CATI Store.
Browse Products