Embrace the Spotlight in SOLIDWORKS Visualize 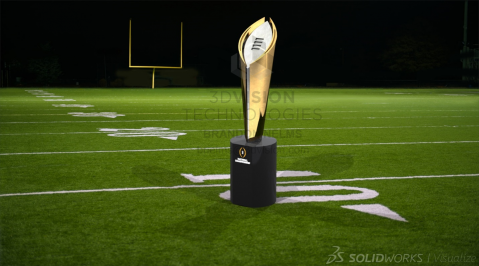 Today is the day millions of College Football fans have been waiting for. The National Championship game will be played tonight and the winner will be crowned the best team in the country. If you ask either head coach or any top collegiate athlete, they’ll probably tell you that to win a championship you have to VISUALIZE winning the game, so today’s tutorial will focus on SOLIDWORKS Visualize (did you see what I did there?).

Now my 40 yard dash time probably won’t get me a shot at competing for a National Championship trophy any time soon, but I certainly can model my own. Take that genetics! Thanks to some pictures online I was able to model up a Trophy in no time. 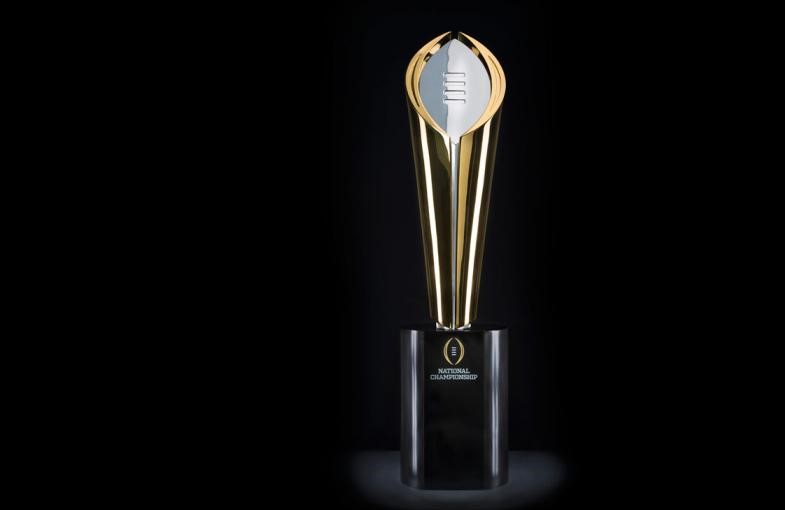 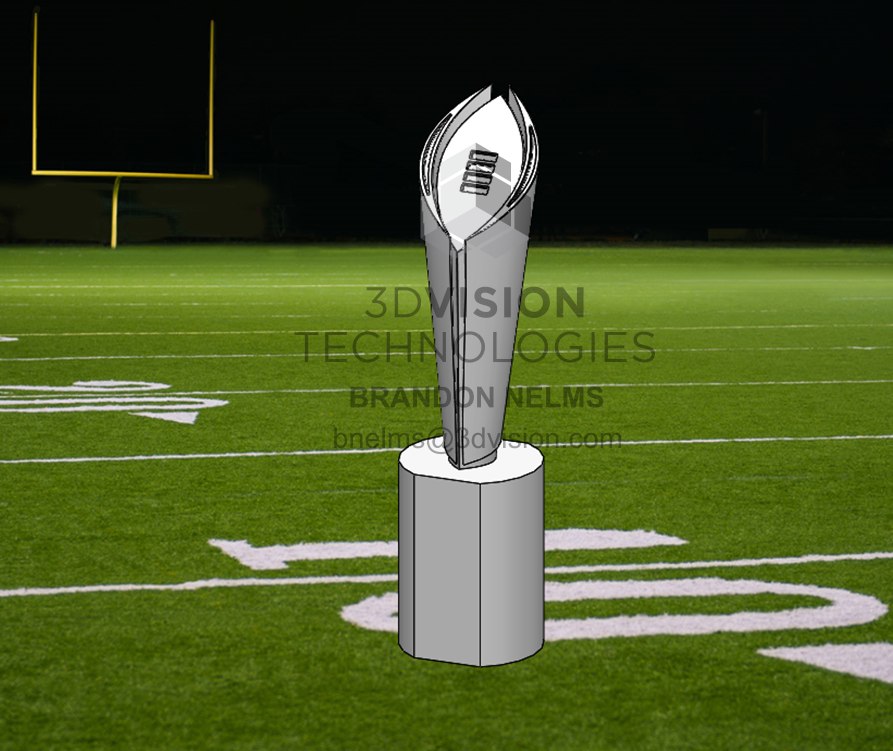 After a quick application of some material appearances and the trophy logo, I’m able to get a pretty good rendering of the trophy using PhotoView 360. 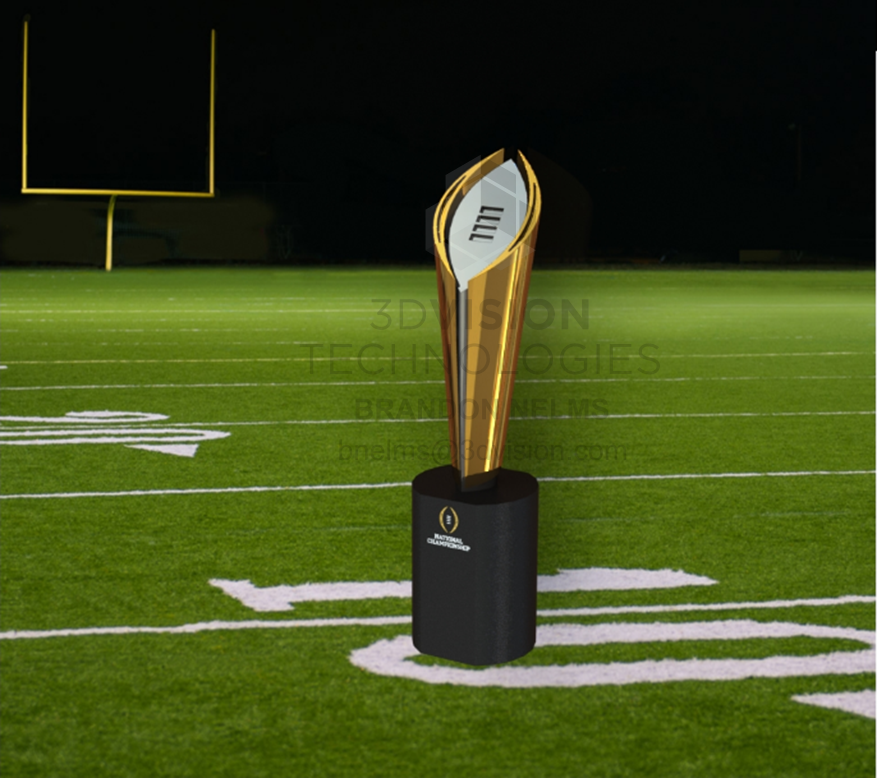 I can quickly create a new project and import geometry from my SOLIDWORKS model.

BOOM, I have my model in my project. Visualize also allowed me to import additional information like the background scene, HDR Environment, and lighting from SOLIDWORKS to my project. 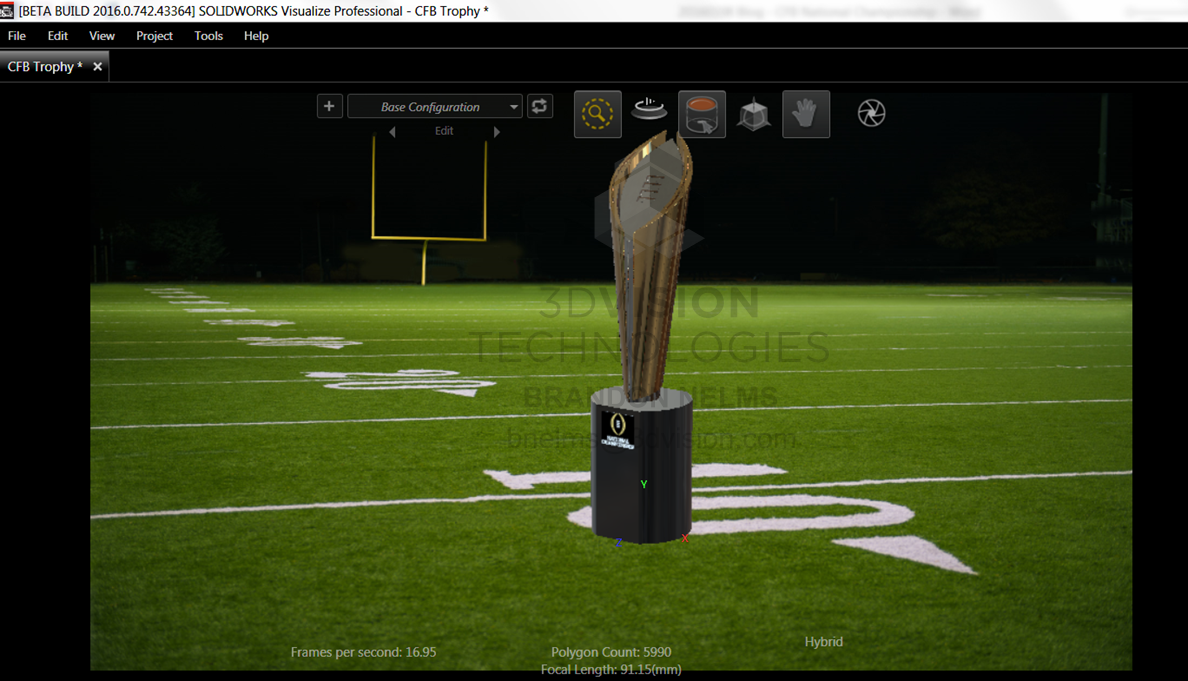 Visualize grabbed what I wanted, but my decal has a black background color that I turned opaque in SolidWorks.  No worries Visualize can take care of that for me too. All I have to do is select my decal and tell Visualize to “Use Brightness as Opacity” and I’m all set.

Now I’m ready to do a rendering in Visualize.  From my tool ribbon at the top, I can select “Render” and start rendering. 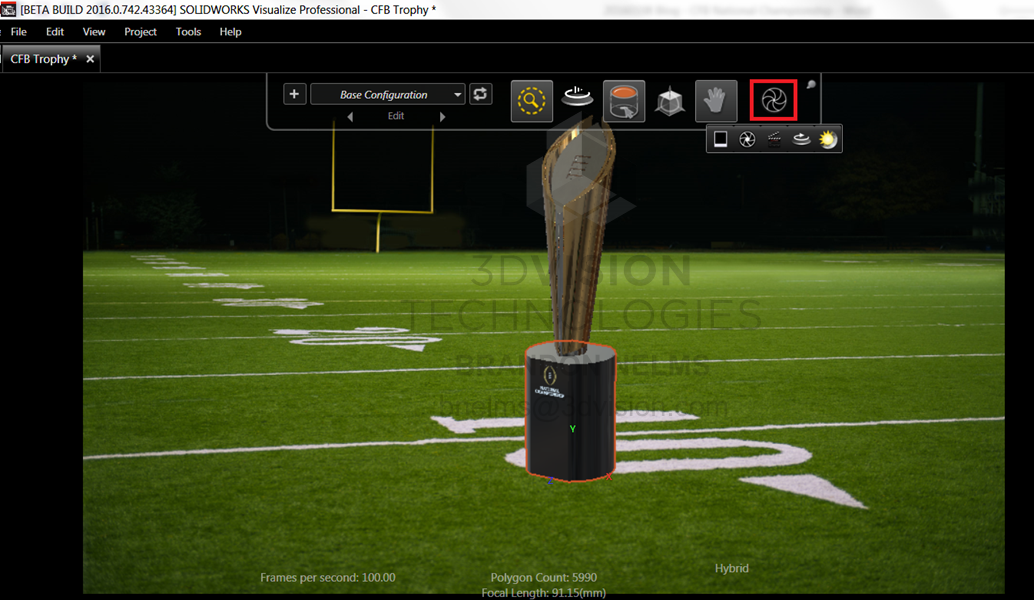 In no time I get a quick high quality rendering. 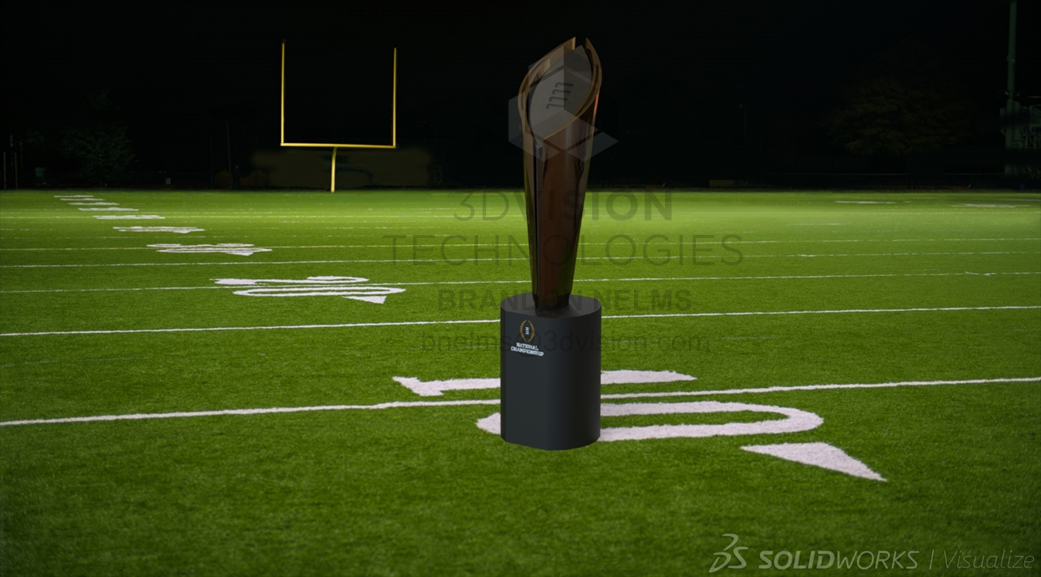 But I think the scene I selected in SOLIDWORKS doesn’t give me quite the lighting I want, so it’s easy to pick a new HDR environment.  And since this trophy has gold and platinum, I’m going to use the auto photo studio by selecting “New HDR Environment” on the Environment tab and the hdr image from the pop up. 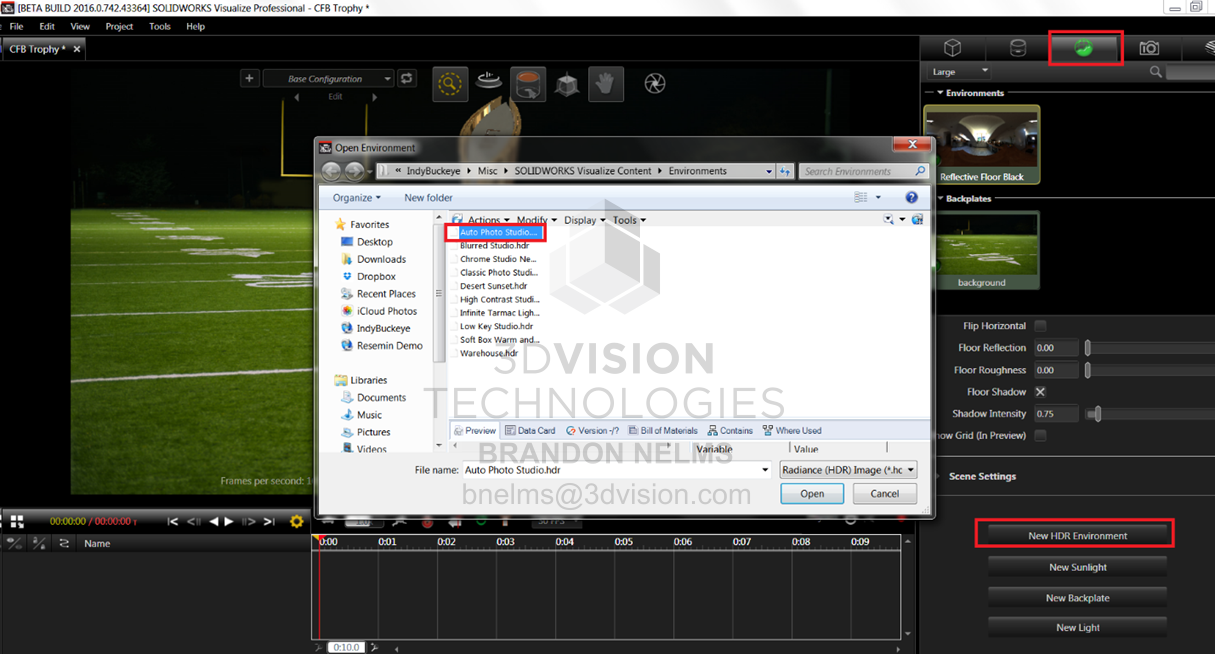 I do another quick rendering and I get an improved image. 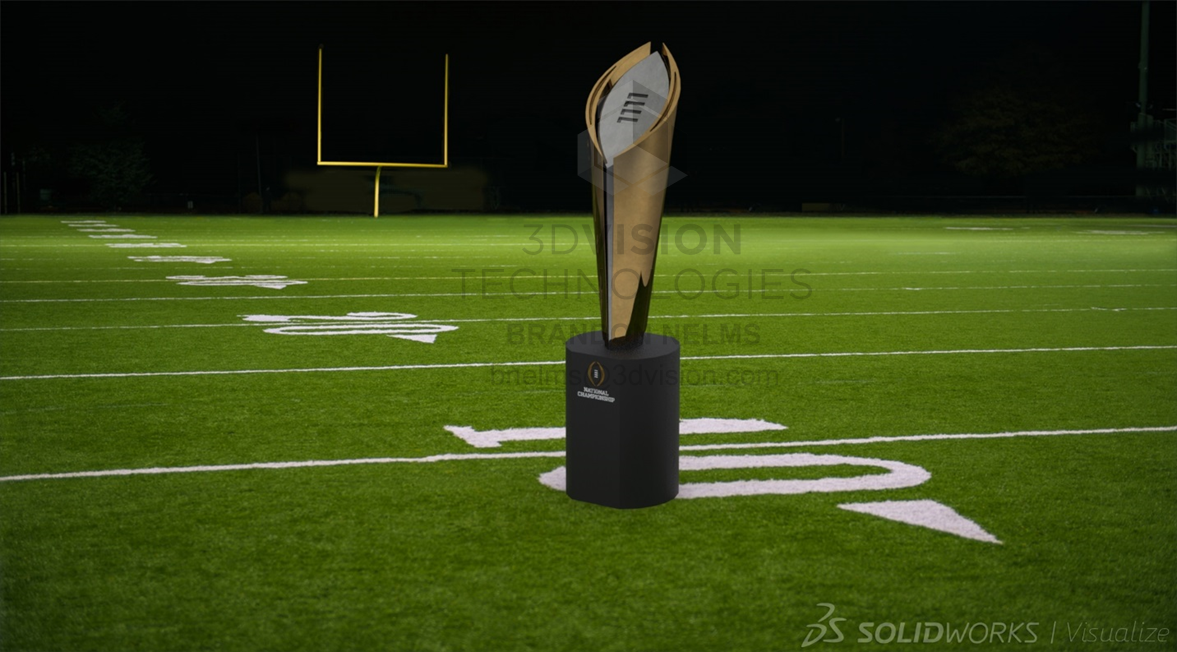 But I still would like it to be a bit brighter. This is the National Championship Trophy! It should shine in all its glory!  So I can easily adjust the brightness of my environment by going to the Environment tab, then adjusting the brightness up from 1.00 to 4.00.

My new rendering looks awesome!  Look at that shine! 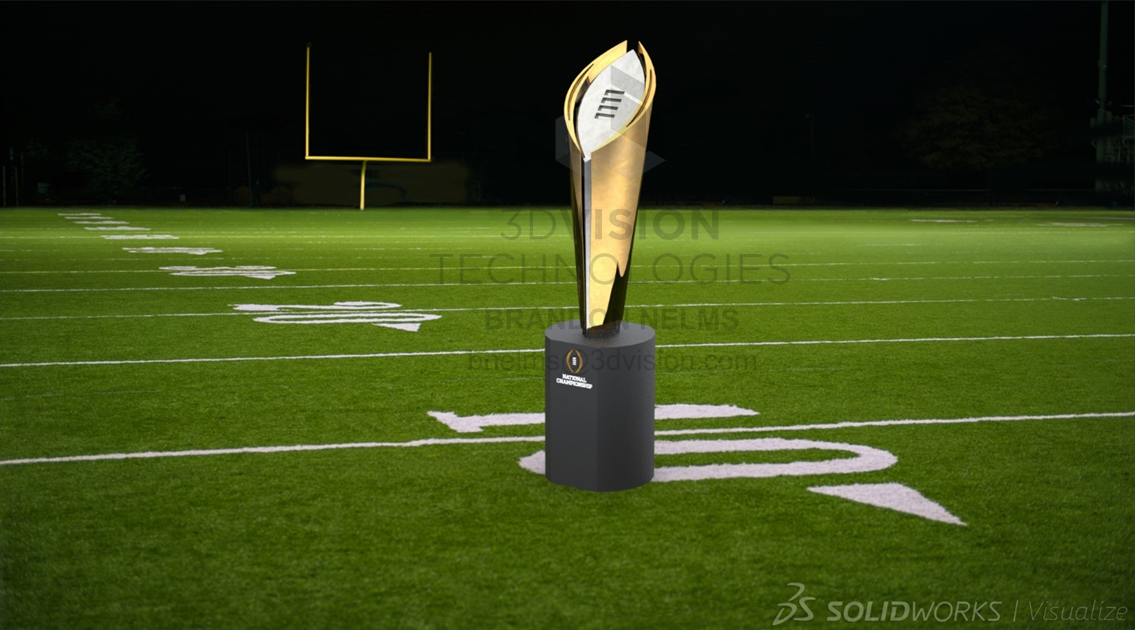 Now I want the base of the trophy to shine a bit more.  And with Visualize, it’s really easy to adjust the Appearance Type.  I just go to the Appearances tab, select the appearance I want to adjust, then pick a different type from the drop down menu.  I think I’ll use Metallic Paint instead of the Paint that I used in SOLIDWORKS to get a great shine. 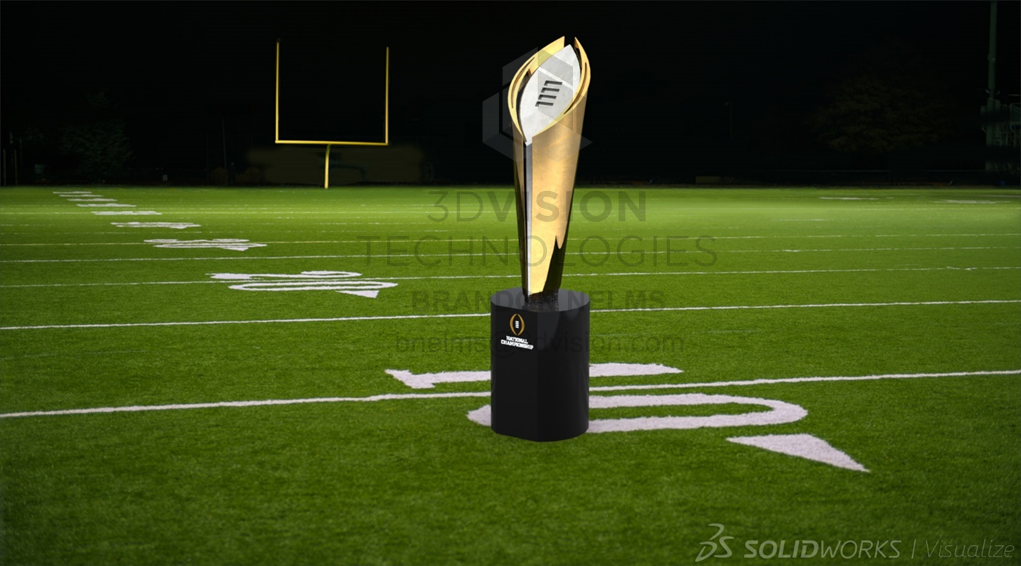 Now I could call it quits now, but my image isn’t quite right yet.  Since I have a night scene for this trophy, I need to see multiple shadows on the ground from the light towers.  The players tonight will be under the SPOTLIGHT……so…..I’m going to use spotlights! (yea I went there)  All I have to do is go to the Environment tab and select “New Light”.

I’m going to add a Directional Light (ok, it’s not a “spotlight”, but you’ll have to deal with it…). To change the light, I’m going to select Environment, then the Light I want to adjust and change the Type to “Directional”.  I’m also going to adjust the Brightness and position to get the shadow I want. 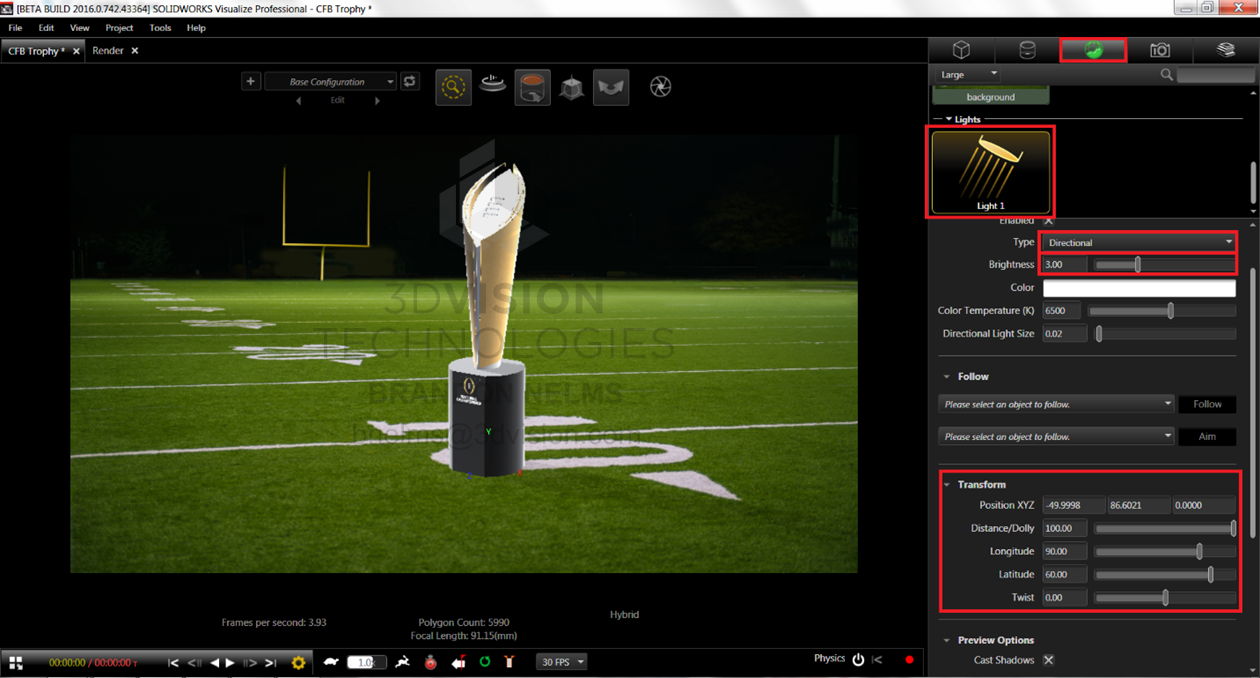 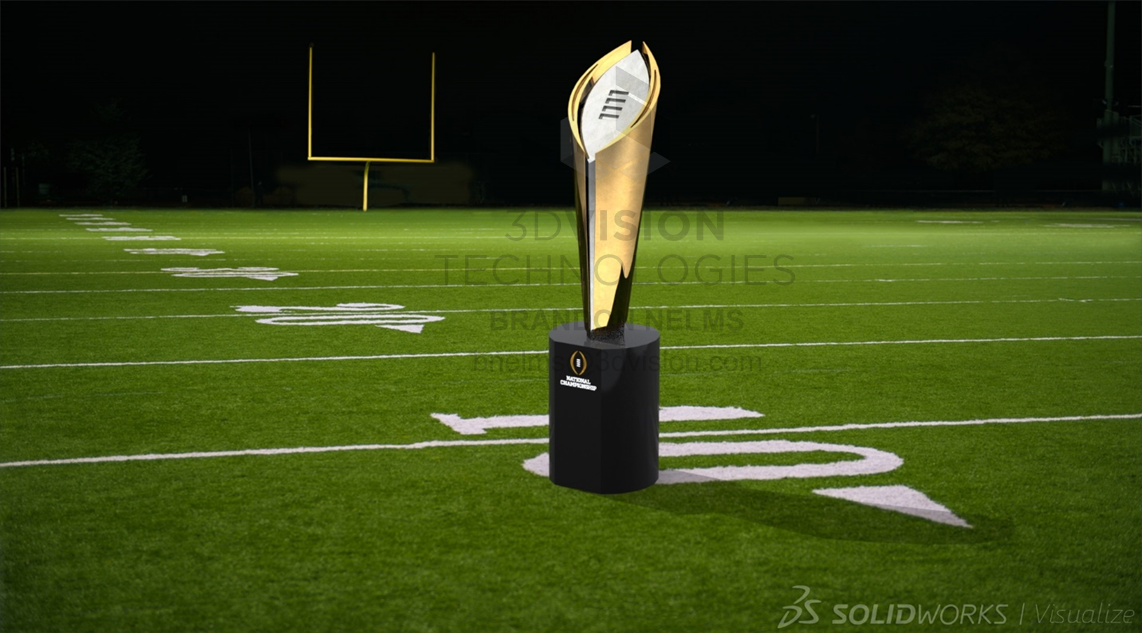 And that looks just about alright.  Since there are multiple light towers on the field, I’m going to add three more identical directional lights and adjust their Longitude to cast a total of four shadows on the ground.  But when I add the fourth light I get the following message from Visualize.

But since I’m not too worried about the speed I’m just going to say OK and keep on going.  After just a few minutes I get a high quality image with the shadows placed where I want them. 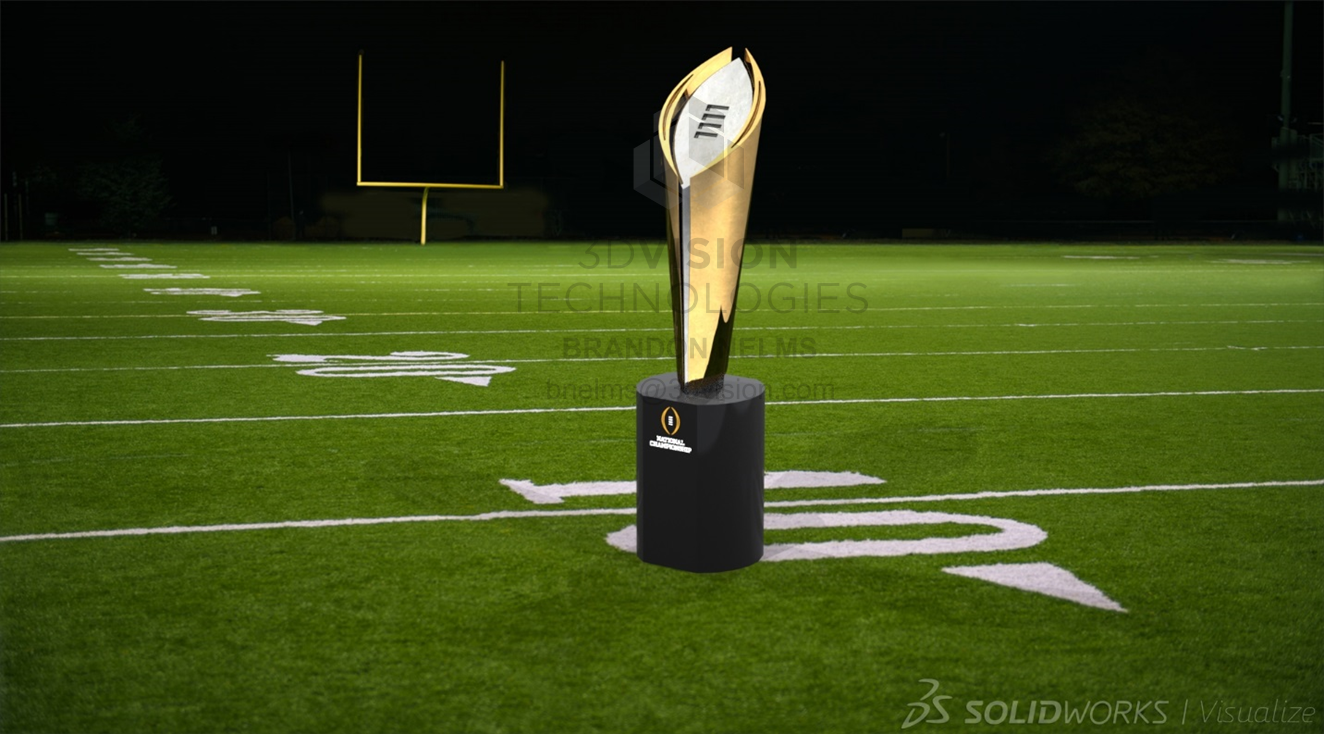 It’s the fourth quarter now and I’m almost there.  But the guys on the field tonight won’t be able to secure that victory without a little intensity, so I’m going to adjust my Shadow Intensity! (I think I’ve officially reached my pun limit for this blog)  To adjust the Shadow Intensity, I’ll go to Environment, choose my Auto Photo Studio Environment, and then bump up the shadow intensity from 1 to 1.5.

My final rendering looks so real I almost feel like I took a picture of the trophy myself! 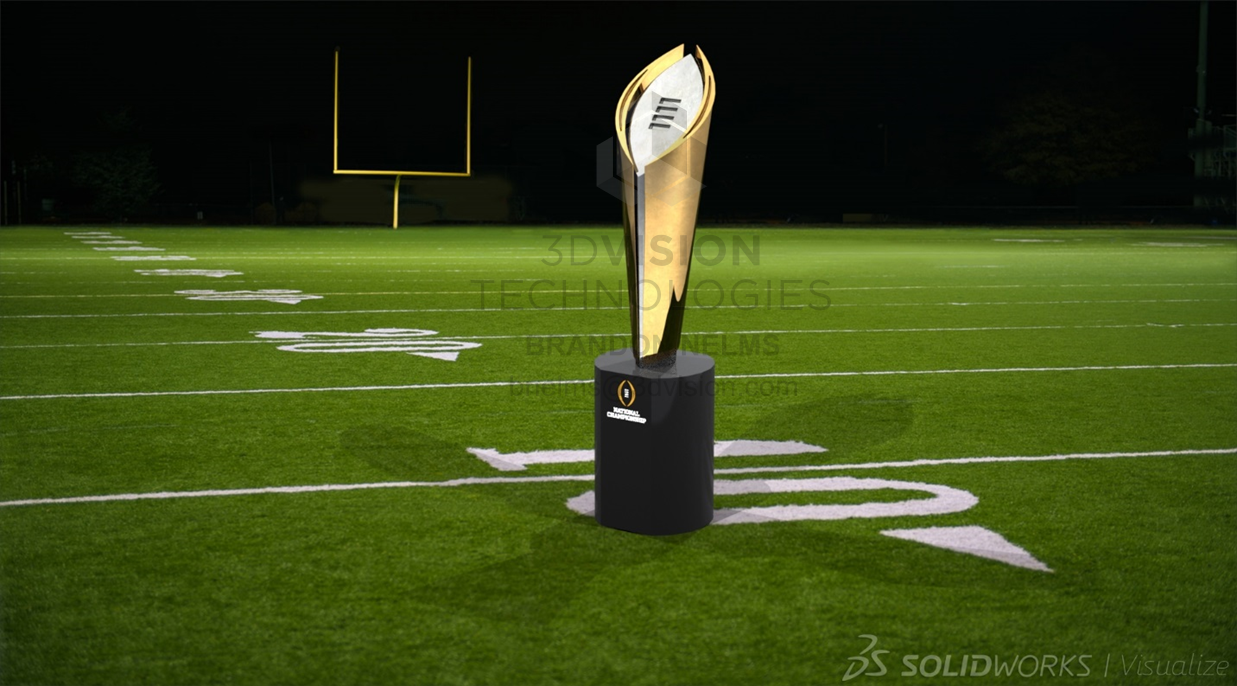 If you have questions or comments please share in the comments section below!