Back in 2015, I tried an experiment comparing model size (number of cells) to memory needs and solve time. When I used SOLIDWORKS 2016, it was better at taking advantage of multiple cores as shown below. 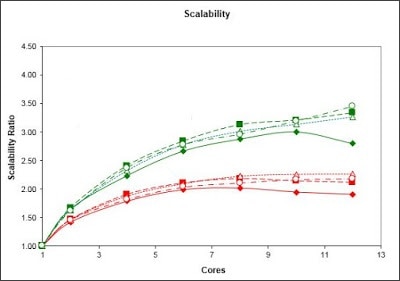 The old solver started to lose advantages around 6 cores per job. You can see that the green curve is still upward sloping after 6 cores, that is the new solver.

The clearest observation I can make from this exercise is that your machine needs to be balanced. There’s no sense in having many cores and fast clock speed if you are choking your system by not having enough memory or fast enough access to the memory. We saw that with only 12Gb of memory, the dual quad core xeon is orders of magnitude slower than all the machines in the group. To get the biggest bang for the buck and based on some of the data here, I would spec out a dream machine as follows:

1.With flow, you are not charged per CPU and can run up to two jobs at a time. I would start by ensuring that I have enough memory to run two large jobs at a time. With 3.7M cells, we were using about 20Gb of memory; assuming I might run two slightly larger jobs, I would go with 64Gb of memory.

2.The scaling on the 6 core machine was still good at 6 cores, so I would want a dual 6 core machine to run both jobs at once. For 2016 and beyond I would like 8 cores per job running.

3.To ensure writing to disk does not impede speed, I would recommend an SSD drive.

Based on those estimations if I were building a new machine in order of preference I would choose these basic configurations revised for 2016:

Bronze/Mobile: i7 or mobile xeon , 32Gb of RAM and an SSD drive. note

Always be sure the graphics card you are selecting is certified, but it’s not going to be crucial for solving the problems; however, with large models, it will help in reviewing results. Note that all the machines still have a minimum of 32Gb, since RAM is relatively cheap and really contributes to computing quality of life.

In a nutshell remember:

RAM = size of the model

Lastly, all machines are running SSD since that will also prevent and read/write bottleneck with the faster CPUs and Flow Simulation can be disk intensive for larger model (1M cells or more).  I would still have a secondary standard drive for longer term storage, but I would run and solve from the SSD.

I hope this helps! If you are in the market for new hardware we’ll get you set up with one of our current promotions with the latest enhancement of SOLIDWORKS 2017 Simulation.

Tech Tip: How to see Shared Mates Between Assembly Components