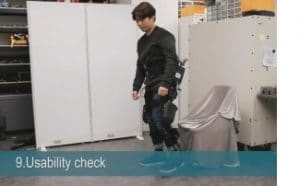 The Day 2 General Session of SOLIDWORKS World 2018 on February 6th at the Los Angeles Convention Center showcased engineers, inventors and entrepreneurs explaining how they used SOLIDWORKS to turn their visions into reality. For example, Boom Technologies is developing a supersonic jetliner that can fly from New York to London in three and a half hours, half the time it takes to get there today. SG Robotics uses SOLIDWORKS to design exoskeletons that enable people with a wide range of disabilities to walk without assistance. Two Bit Circus is designing a fleet of next generation micro-amusement parks that will include the latest in multi-person virtual reality and mixed reality games, social play experiences, group games and liberal use of lasers, fire and robots.

Suchit Jain, SOLIDWORKS Vice President Strategy and Community, kicked off the general session by noting the massive and growing impact of the over three-million-person SOLIDWORKS user community that is driving innovation in many different fields including aerospace, automotive, consumer electronics, industrial machinery and many others. As a case in point, Jain shared the stage with Mike Jagemann, Head of XB-1 Production at Boom Technology, a startup that is developing a supersonic aircraft that will fly 45 passengers up to 4,500 nautical miles at Mach 2.2, 2.6 times faster than today’s fastest commercial flights. The company’s goal is to bring the cost of supersonic flight down to the cost of today’s business class and eventually to the cost of an economy class ticket.

Jagemann is currently leading the construction of the XB-1, a one-third scale flying realization of the Boom passenger airline that is scheduled to fly next year to showcase advancements in aerodynamics, materials, propulsion and flight controls. “This entire plane was designed in SOLIDWORKS,” Jagemann said. “We have also utilized SOLIDWORKS product data management (PDM) and simulation solutions and we are starting to use virtual reality for assembly analysis and ergonomics. We joined the SOLIDWORKS for Entrepreneurs program at the inception of our company and we’d like to thank SOLIDWORKS for all the support and encouragement they have provided over the life of our company.”

Enabling Paraplegics to Walk with SOLIDWORKS

Sogang University Professor Kyoungchul (KC) Kong and his firm SG Robotics was featured at SOLIDWORKS World for his work in developing exoskeletons that reclaim mobility for paraplegics and others with partial disabilities. In 2016 SG Robotics participated in the world’s first Cybathlon, a once every four years competition for people with disabilities. Supported by the latest assistance systems in various disciplines, Cybathlon athletes compete against each other to solve everyday tasks. Cybathlon athlete Byeongwook Kim used an SG Robotics WalkON exoskeleton to come in third in the EXO race, demonstrating his ability to walk on stairs, slopes, stepping stones and other difficult surfaces. SG Robotics new exoskeleton called Angelegs is designed to assist those with partial disabilities. Angelegs generates assistive torque to the joint only when needed which reduces the friction and resistance experienced by the wearer. 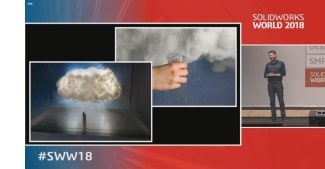 Brent Bushnell, Chief Executive Officer of Two Bit Circus, provided the keynote address in which he spoke about how the company uses SOLIDWORKS to design temporary high-tech entertainment and promotional installations for corporate clients. For example, Two Bit Circus teamed up with Google Virtual Reality, NFL Films to provide a 360 degree perspective of the Philadelphia Eagles defensive line as they prepare for an upcoming matchup. Two Bit Circus is currently designing a series of micro-amusement parks that will feature 50,000 square feet of immersive entertainment. “Our new space will feature emerging technologies, exclusive prototypes and provide a stimulating and social atmosphere with a dash of adventure,” Bushnell said. Approximately 20% of the games will be virtual reality based while others will involve motion sensors, electronics and robotic elements and other high-tech twists on traditional carnival games.

“I am very passionate about mentorship,” Bushnell added. “If you are not already a mentor, be a mentor. That’s something we need more of in the world. I salute the contribution that SOLIDWORKS is making in STEM education. I am thrilled to see a company pushing that message.”

Four SOLIDWORKS partners took the stage on Day 2 to talk about capabilities they are providing through their integration with the CAD software. SOLIDWORKS announced a partnership with Meta Company to offer 3D CAD viewing capabilities in augmented reality (AR). 3D System’s 3DXpert for SOLIDWORKS will provide everything you need to prepare and optimize your design for additive manufacturing (AM). Desktop Metal previewed an advanced generative design tool, exclusive to SOLIDWORKS, that applies morphogenetic principles and advanced simulation to shape strong, lightweight parts in minutes. Nano Dimension Ltd. unveiled a new SOLIDWORKS add-in to its DragonFly 2020 Pro 3D Printer that creates 3D printed complex geometric structures with embedded electronics, encapsulated sensors, antennas and more.

The more than 5,000 engineers, educators, students, industry leaders and partners gathered in Los Angeles for SOLIDWORKS World 2018, left the Day 2 general session inspired and energized as they headed off to the day’s breakout sessions. Fisher Unitech will be back with a report on the final general session on February 7th.

Christa Prokos is a marketing manager at Fisher Unitech. She researches and writes about the latest business trends and technologies impacting manufacturers, including 3D printing, SOLIDWORKS 3D CAD design and product data management tools, product lifecycle management, virtual reality, and the Internet of Things. Christa has worked as a high tech marketing and communications professional since 2000. You can follow her on Twitter: @ChristaProkos.