Every now and again, there are interesting Engineering feats that catch my eye.  I think it happens to all of us when we’re in that Internet browsing haze (or looking for interesting topics to write about)!  While I played my fair share of ping pong during college, I can honestly say that my best forehand smash never resulted in breaking the sound barrier!  Enter the Purdue College of Technology, some motivated doctoral students and their Supersonic Ping Pong Gun!

After watching the video a few times, I decided to attempt to recreate this virtually using SOLIDWORKS Flow Simulation and SOLIDWORKS Motion.  There are a couple of things to note about solving a problem like this.  Since SOLIDWORKS Flow Simulation will not physically move the ping pong ball as the air strikes it, I will have to measure the force of the air acting on the ball’s surface.  I’ll use that force in SOLIDWORKS Motion later.  Also, I don’t know the dimensions of the model or the flow characteristics of their system, so I’ll make a guess or three and see what happens.  Finally, with all I do not know about the Supersonic Ping Pong Gun, this should be a fun exercise to see how close I can get with a few guesses.

I started by creating a model of a launcher tube, a standard ping pong ball (40mm diameter, 2.7 grams mass), and added two lids for the Flow Simulation.  I set up a Flow project using air as the fluid, an Inlet Mass Flow rate of 1 kg/s and an environmental pressure outlet.  I also used the High Mach Number Flow option and set up the problem as a transient analysis, analyzing flow into the launcher for 0.00015 seconds!  To be honest, my initial time setting was 1/100th of a second, but that proved to be far too long to analyze the Flow model.  The last steps were to add a Surface Goal for the normal force acting on the ping pong ball and use a very refined mesh to capture the flow characteristics between the ball and launcher wall.

While running the Flow study, I watched the normal force acting on the ping pong ball rise from 0.075 N at time step 0.000116 seconds to 117 N at time step .00015 seconds.  This is where I have to make an assumption about the model.  The ping pong ball will start moving due to the force of the air, so analyzing the model past this point isn’t adding anything to my simplified analysis.  It also wouldn’t be correct as the spacing between the nozzle and ping pong ball would change, so I considered this to be a good stopping point. 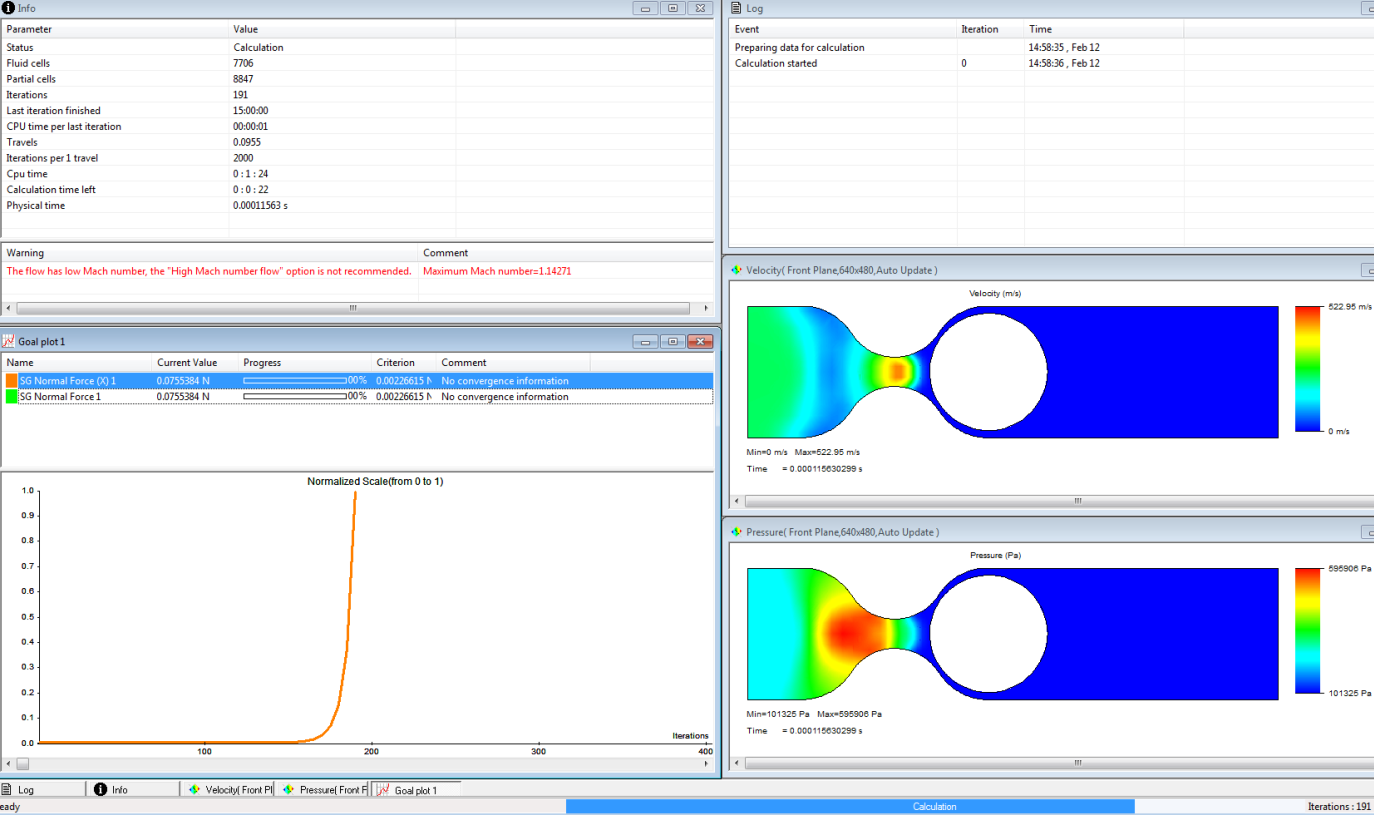 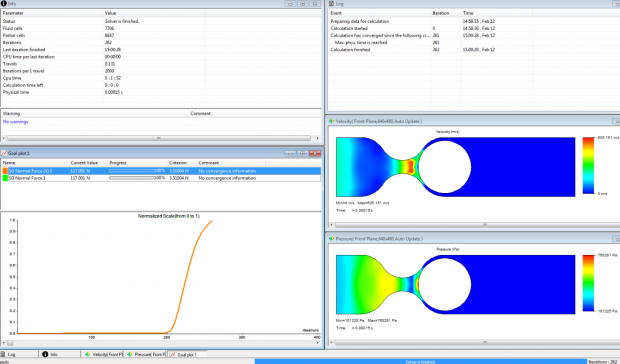 With the normal force calculated, I set up a Motion Study and use that force value to motivate the ball into becoming a high velocity projectile!  Since this happens very fast, I set the Motion Study properties to 10,000 frames per second and the Motion stop time to be 0.02 seconds.  The setup for the force acting on the ball is done in two steps.  First, at time zero, I add 117 N force acting on the ball, oriented along the axis of the tube.  Second, I moved the timeline to 0.015 seconds, edited the Force and set it to 0 N.  Again, I am making another assumption about the model.  I don’t know exactly when or how the force will be dissipated, so decreasing the force over a period 100 times longer than the Flow study time is, in my opinion, as good a place to start as any.

Once the Motion Study is calculated, I created a result plot of the velocity of the ping pong ball.  The speed of sound is 343.2 m/s, so that is ultimately the number I am looking for.  My Motion study result shows the ping pong ball reaches a maximum velocity of 325 m/s.  All things considered, not too bad of a result given all the assumptions I made about the Supersonic Ping Pong Gun! 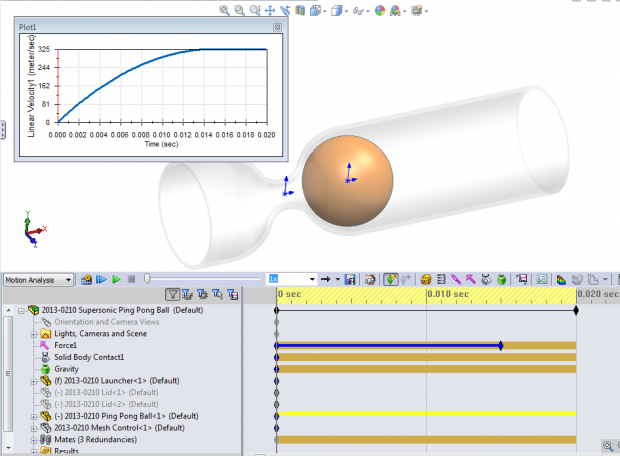 *Disclaimer:  No ping pong balls were destroyed as a result of writing this!